Very early on Sunday Howard, ginga, Keren, Ryan and Flo the Dumb-Ass dog trundled their way oop t'North to Dubfreeze, the season opener. Famed for being miles away, cold, having over-priced food and the bizarrest Show & Shine of the year it has settled down in recent years. The Show & Shine makes a lot more sense and there are several food vans outside if £5 for a bacon butty and coffee from the upstairs canteen sounds too much. And if you're really stupid committed you can now camp on the Saturday night. 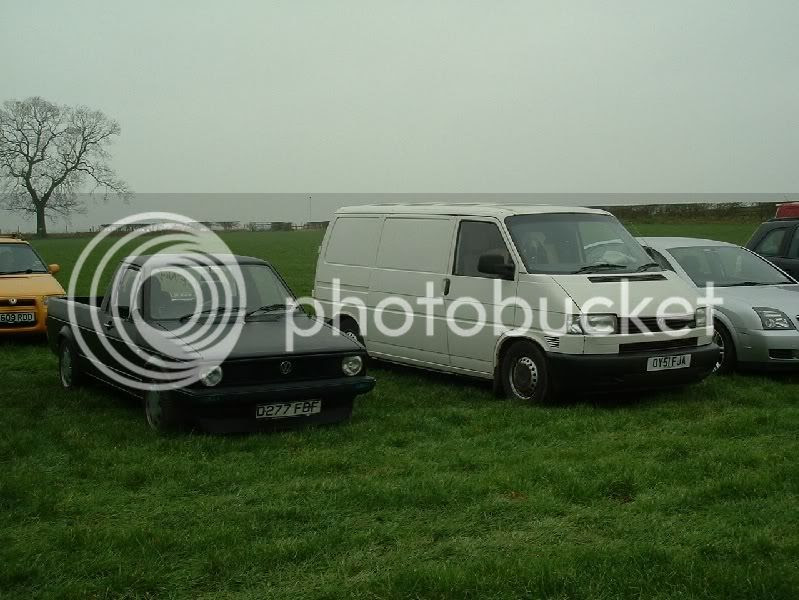 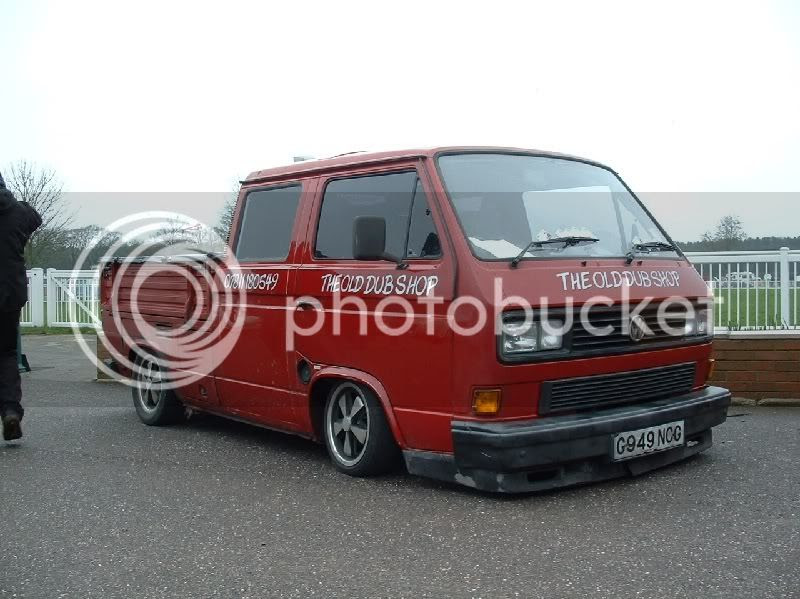 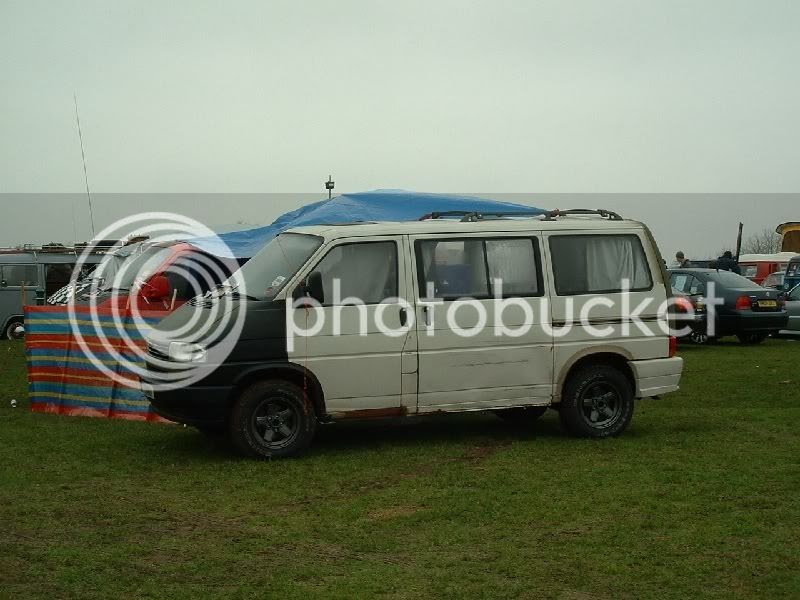 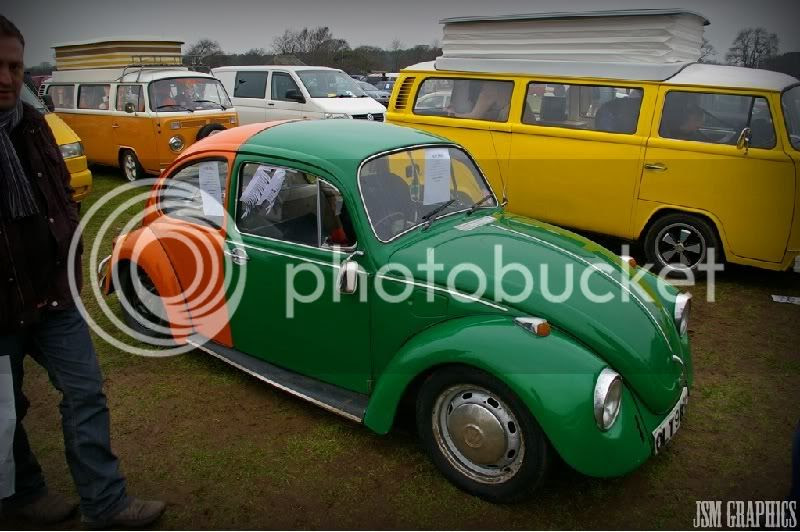 A Beetle of 2 halves 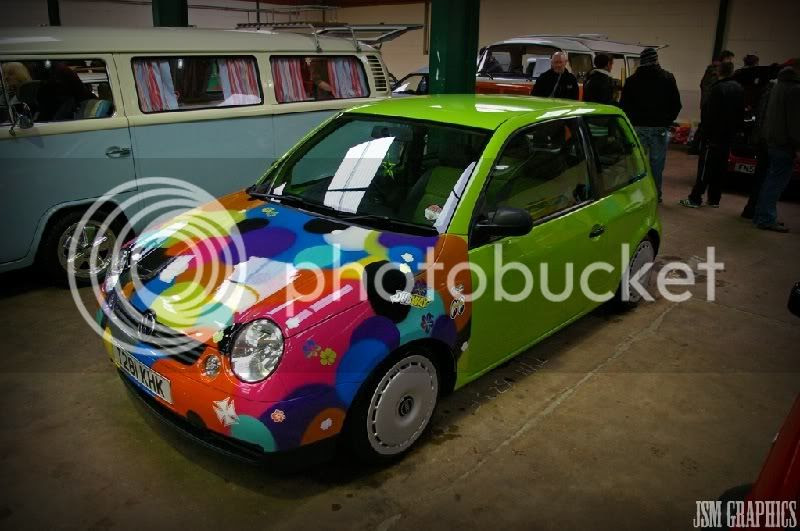 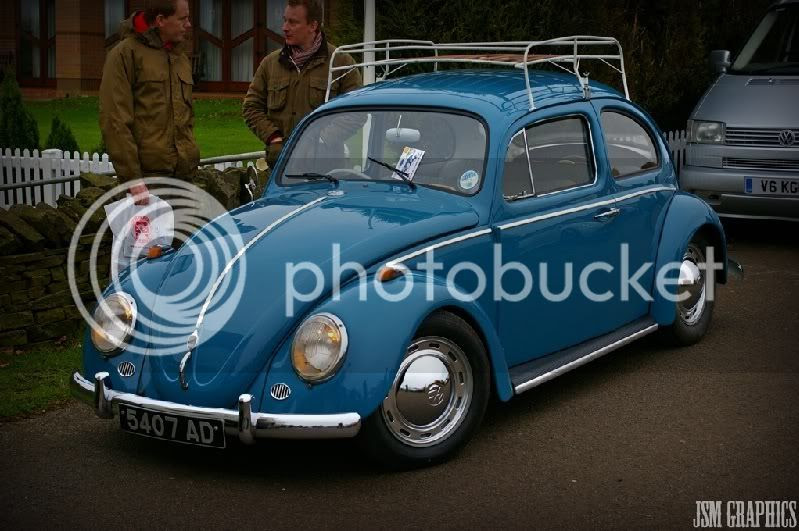 ex-Wheeler Dealers Beetle, up for £7k
ginga managed a couple of bargains, a bonnet and badgeless grill for his T4, along with a couple of parts for the race car. Howard had a nice day out and Keren had a day free of bloody CBeebies. Having been caught out by the onsite catering in previous years we went prepared and enjoyed coffee and bacon butties in the car park, probably the best option after seeing the queues at the food vans. Eventually it was time to head back Darn Sarth where we had the last surprise of the day: fuel is a lot cheaper in the Grim North!
Posted by Lo 'E' Nuf at 11:36 No comments:

March 6th sees the NSRA Swapmeet at Arena Essex, Thurrock. "Our rodding events calendar opens with our huge outdoor swapmeet - from a window winder to a complete car, this is the place to buy and sell new, used and vintage auto parts and accessories."

There Goes The Neighbourhood

Greg turned up on Saturday with his latest purchase to replace Jackie's most beloved liability. This one not only benefits from being structually sound but the walls are attached to the floor and ceiling providing some protection from the Great Outdoors. Compact and bijou (as Fry and Laurie might put it) the interior is well laid out but would benefit from a good clean and a carpet. At least Pot Stoodle and gReece won't have to put up Greg's tent this season. Not for his ma. 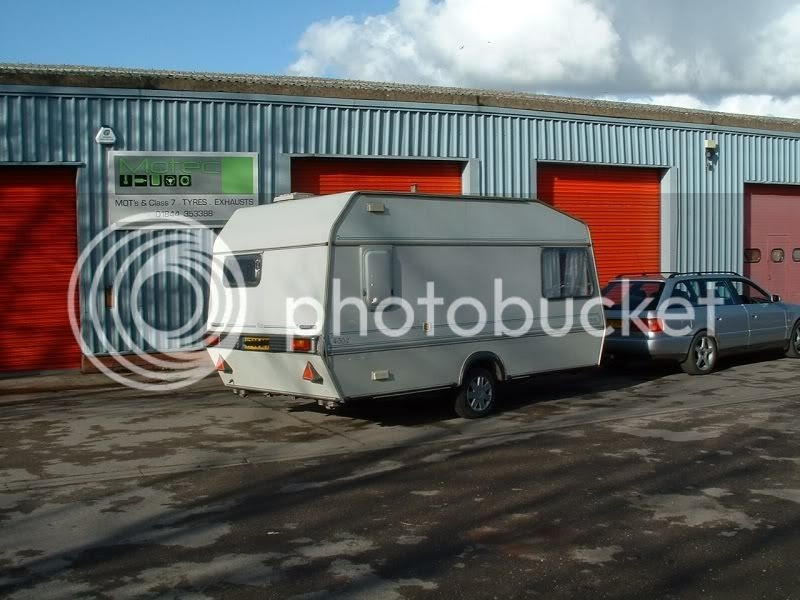 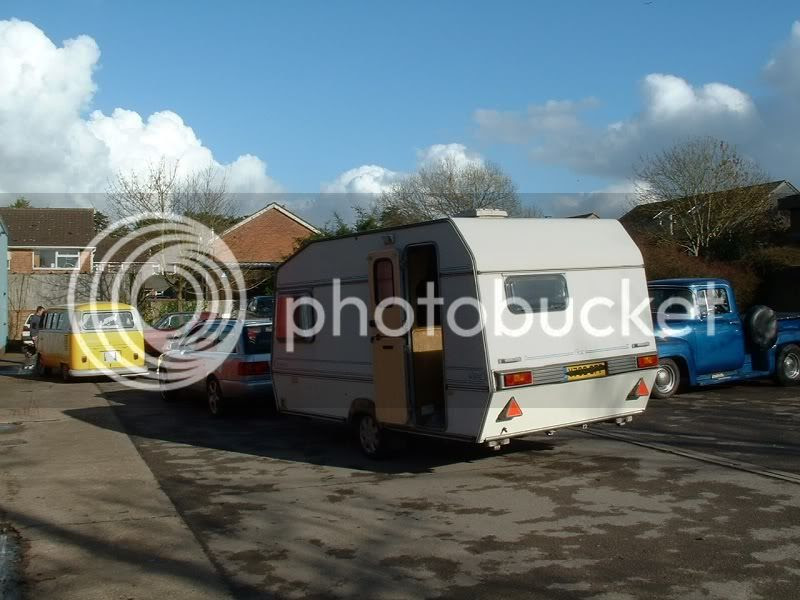 Greg will be living it up at Santa Pod this summer!
Posted by Lo 'E' Nuf at 19:48 No comments:

Sim and his T25 were introduced to the Lo 'E' Nuf blog back in October. Even then the job at the top of the To Do list was the rotten pop-top, despite it being the sought after Autohomes conversion. The original plan was to re-create it from scratch but recently a better plan became possible. ASM in Thame had a T25 camper on its racks, complete with Autohomes conversion. Sim tried to do the proper Lo 'E' Nuf thing by buying it. Afterall, what's better than 1 camper needing work? 2 campers needing work of course! Unfortunately this wasn't possible but he did get everything off it before it went for crushing, including the complete roof/conversion from the pillars up.
Last Saturday was roof day at the workshop. With assistance from gReece, Howard and Greg(!) the old conversion was removed, the roof cleaned up and the new roof fitted. Sounds easy when you say it quickly! 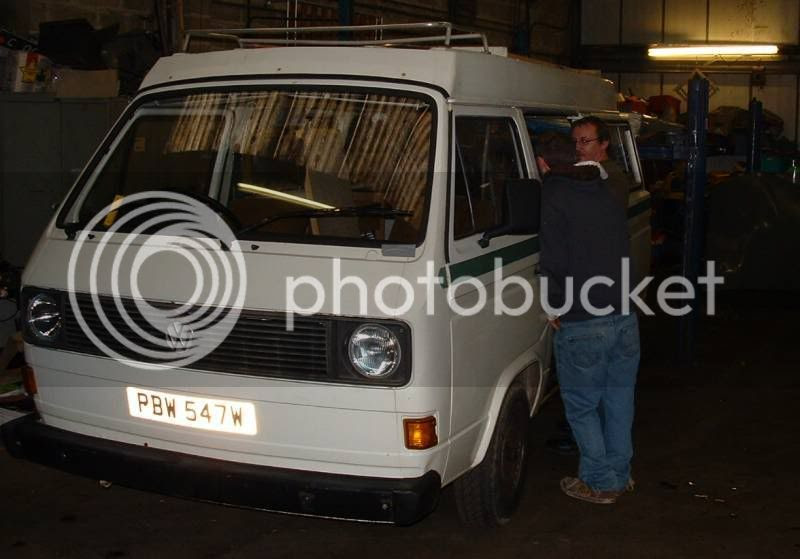 Elevating roof off, roof cap next 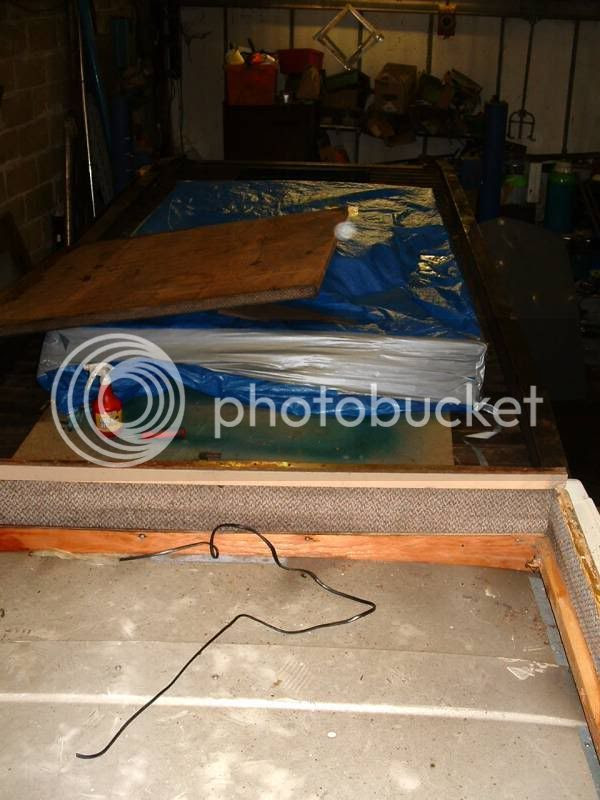 Elevating roof off showing original van roof.
The roof top was in quite a state and held together with a layer of
boj tape, a blue plastic sheet followed by another layer of boj tape. 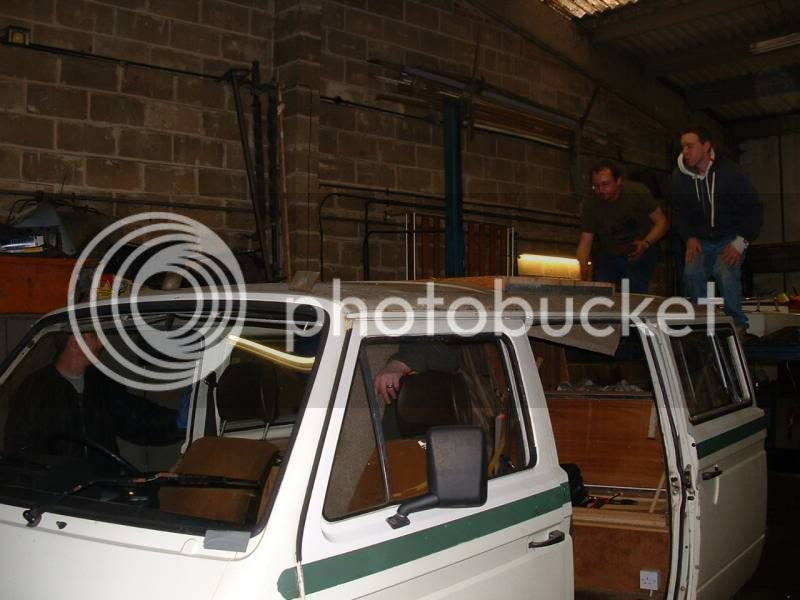 Roof cap off - last chance for a Rag Top .
Next job was to clean up roof and gutters and make
sure any bare metal areas had a nice coat of POR15. 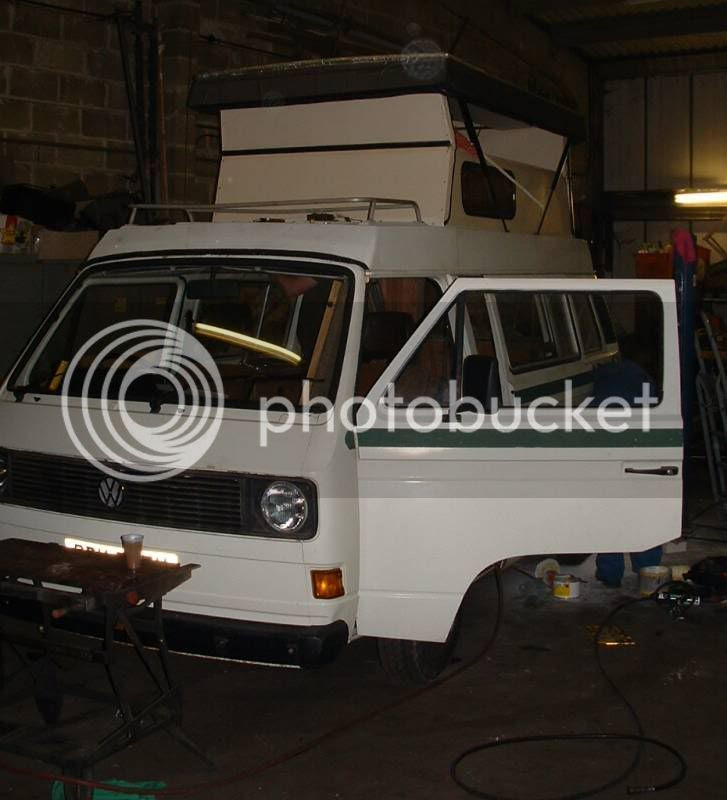 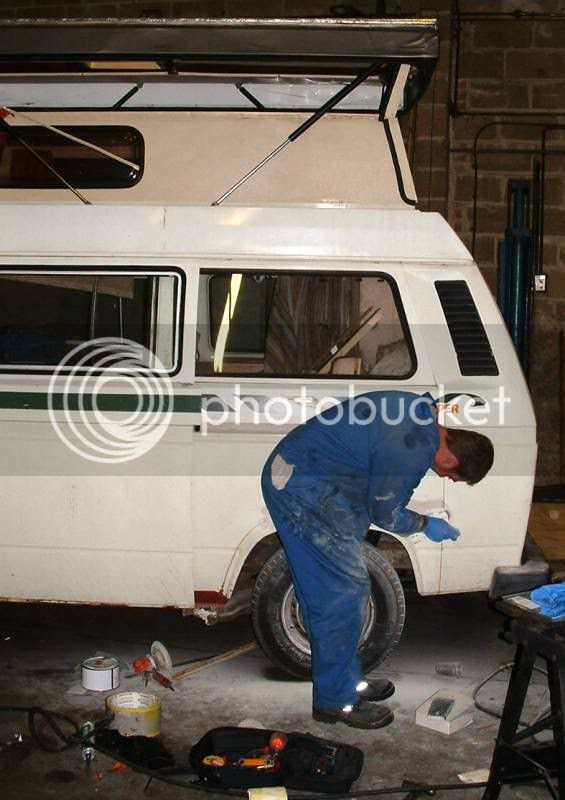 One thing that Cris really hates is sanding bodywork.
Which is why he jumps at it at every opportunity! 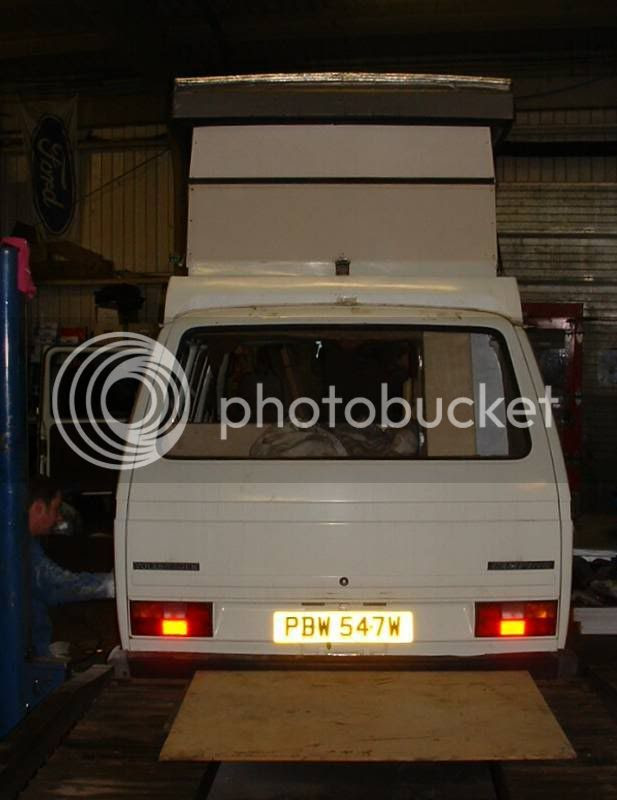 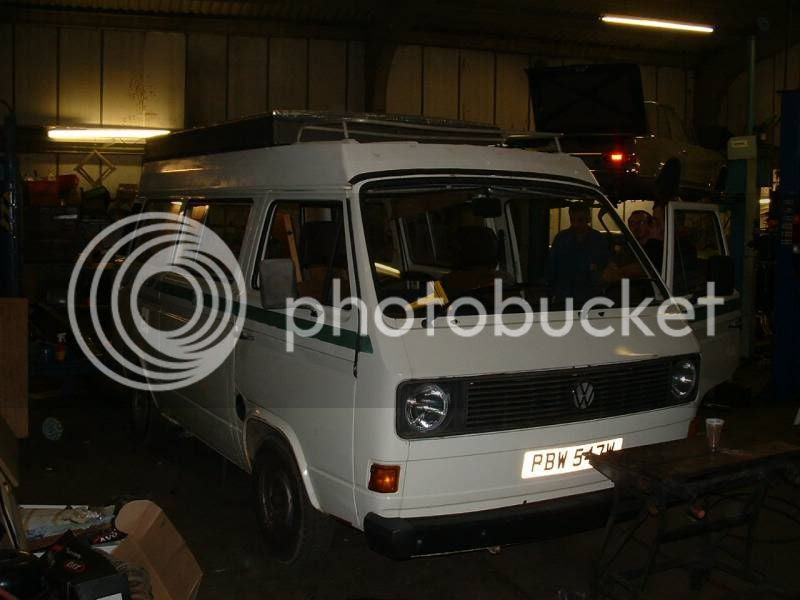 Plenty of jobs still to be done. Sim needs to make an interior out of the 2 he's got plus the sliding door needs a bit of work but it's all coming along nicely and should be in use at shows this season.
Sim's build blog
Posted by Lo 'E' Nuf at 16:54 No comments:

Dub Aid have refreshed their website and started to fill in the blanks. The entertainment line up has filled out but beware, this includes Karaoke on the Friday evening!