Howard's been having a little trouble with his Caddy lately. Back in the spring it popped its head gasket right before Big Bang, so he and Ross slapped a new gasket on it so it could make it to t'Pod for the weekend. When it popped again H took the head off, cleaned it, had it skimmed, cleaned up the valves, checked the guides, fitted new tappets and a Lumpy Bumpstick race cam from Cris's parts stash and went for it again. This time a tappy tappet and a suspicious bottom end knocking called time - with Bug Jam fast approaching there wasn't time to get it done.

Bug Jam over, but with a shortage of time and money, and a holiday approaching H decided to forget about it 'til later - the Lo 'E' Nuf way.

Meanwhile, me and Ross started plotting and one evening Project Hello Kitty was born. We would 'steal' the Caddy when H was on the Lo 'E' Nuf group holiday and do a 2.0 litre conversion - which was nice for H - but there would be a cost, something H would have to live with, you don't get nothing for free...

Fire up the Ebay!

A couple of days later a complete AGG 2.0 engine from a 1998 Golf was bought from Watlington. On the way back we discovered the dizzy wouldn't work with H's Digifant so one from an earlier 2E 2.0 engine was Ebay'd. Meanwhile, back at Casa del ginga,  we stripped down, checked, cleaned and painted the 'new' engine as much as we could. The new engine was equipped with a 70A multi-ribbed-belt alternator so it and all of its brackets and pulleys were checked/cleaned up. At the same time we ordered a new metal head gasket, water pump, timing belt, oil and filter. 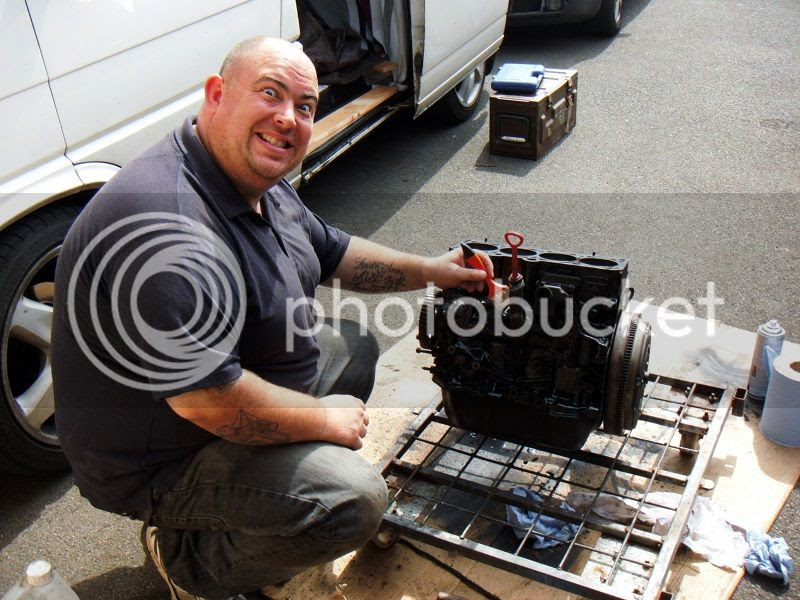 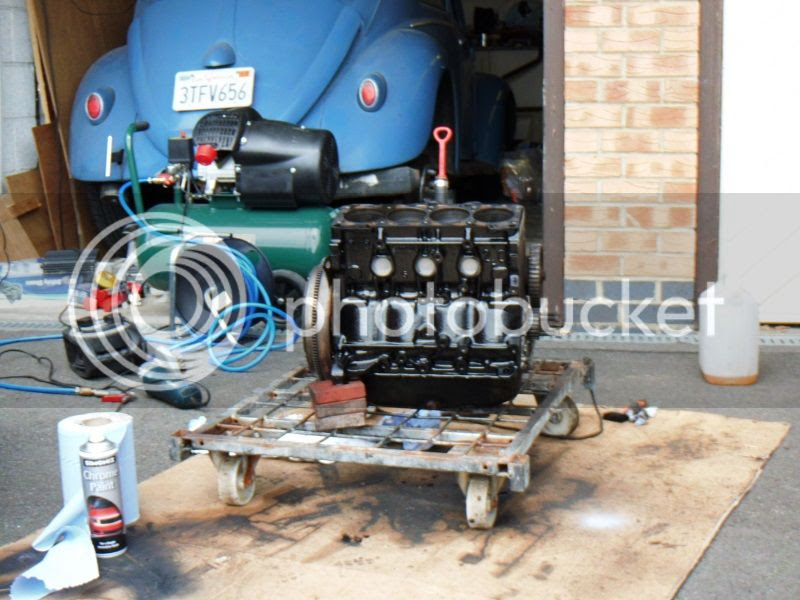 Then we found out that H wasn't going on the group Camp-a-thon at the Isle of Wight after all but was joining them for the Somerset leg a week later. This meant we had an extra week of keeping schtum and twiddling thumbs. It also led to not-Workshop Night being a BBQ at my place that week and H gave us his tale of woe unaware that 20 feet away was his new engine... 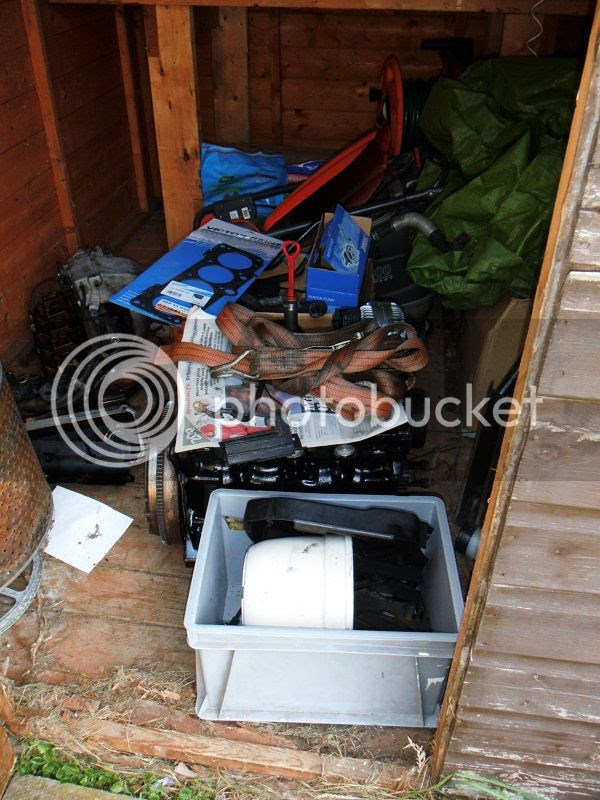 Nothing so see here, move along...

Finally, Friday August 16th rolled around and in the afternoon H, the Birks, the Paynes etc etc etc all trundled off for a 4 day weekend of camping, cider and dog bites. Once they were gone Ross delivered the Caddy to my place, along with a borrowed engine crane, and at (quick glance at the wall clock) 2.41 we could begin. 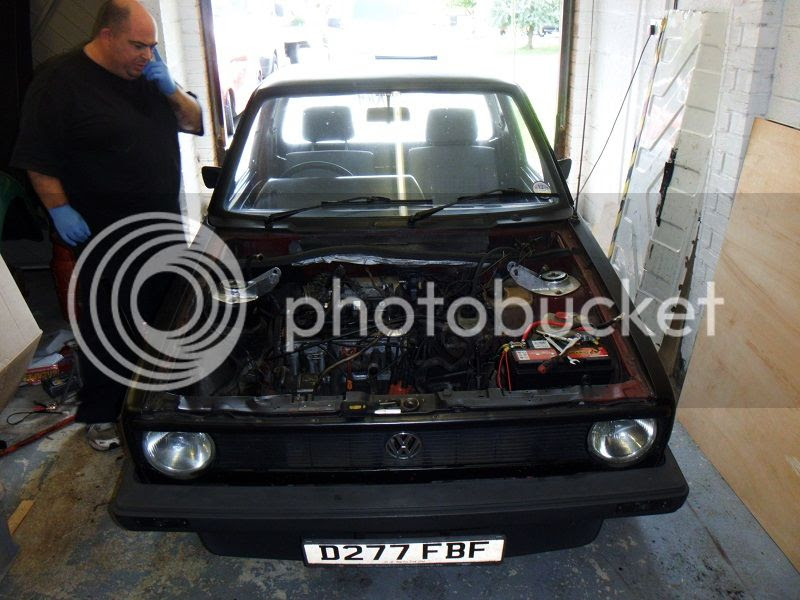 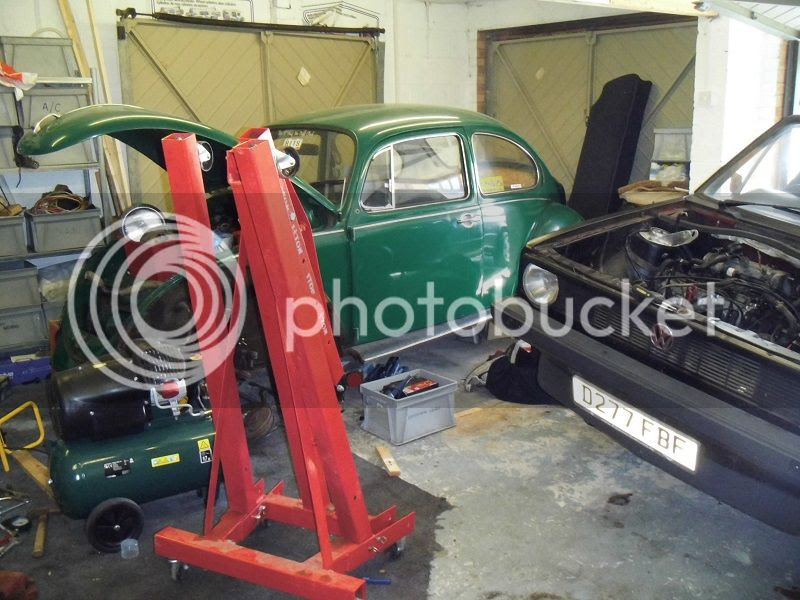 Somehow my garage is full of Howard's cars 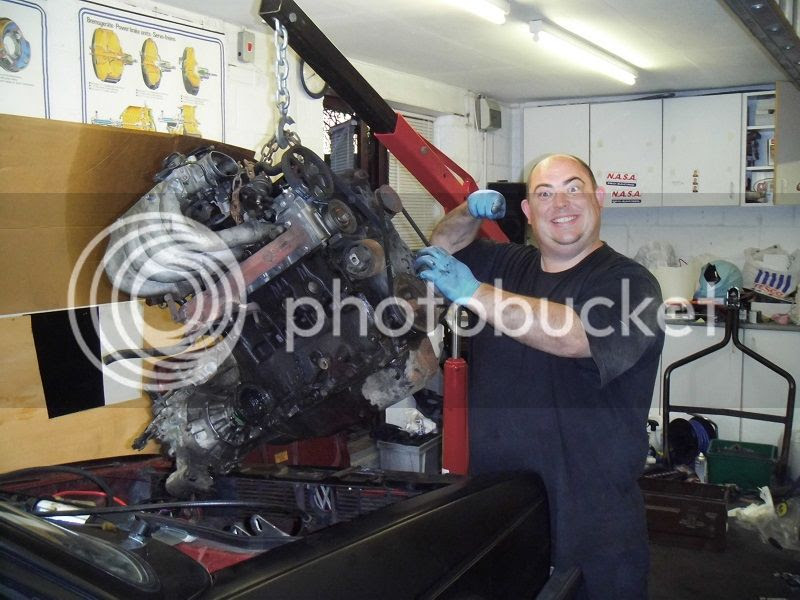 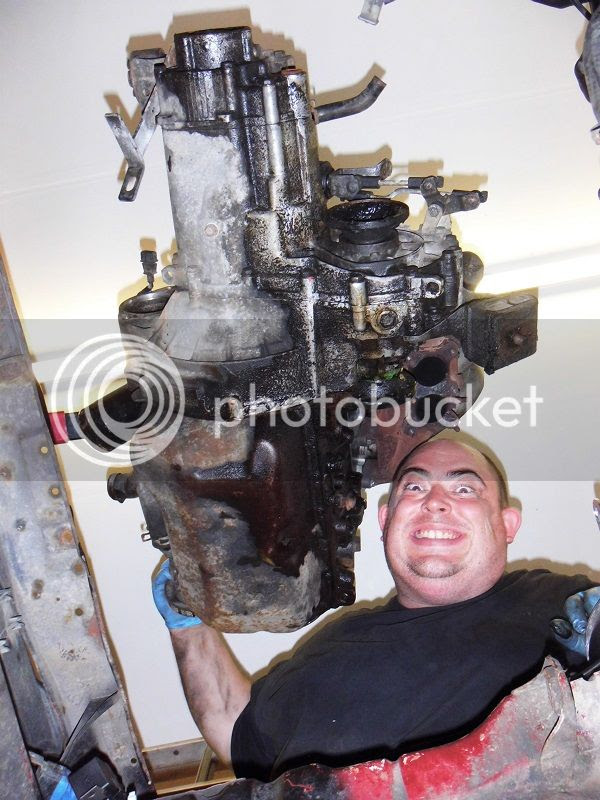 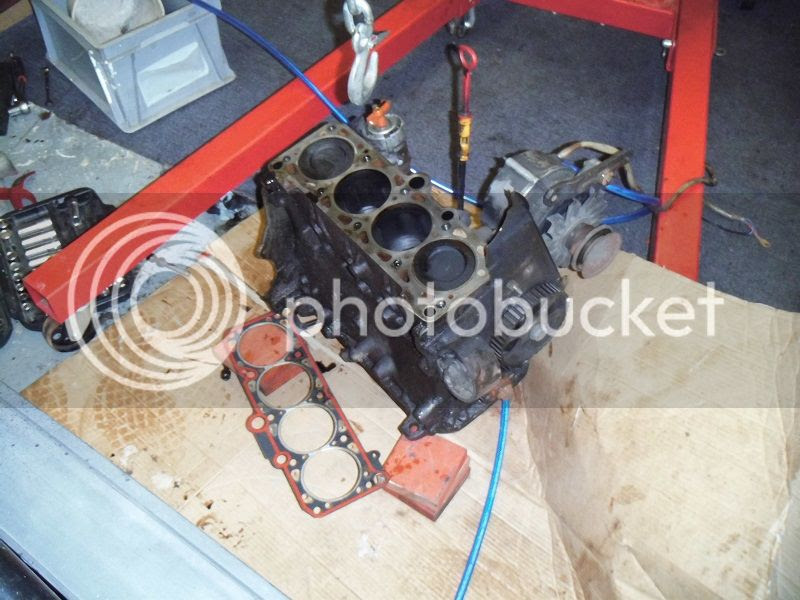 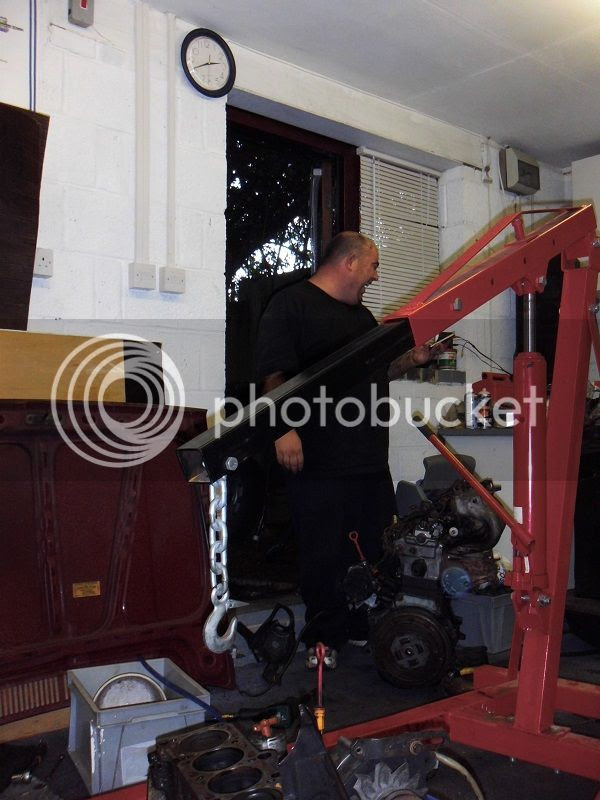 Howard's head fitted onto new block and it's only 2.41 - plenty of time 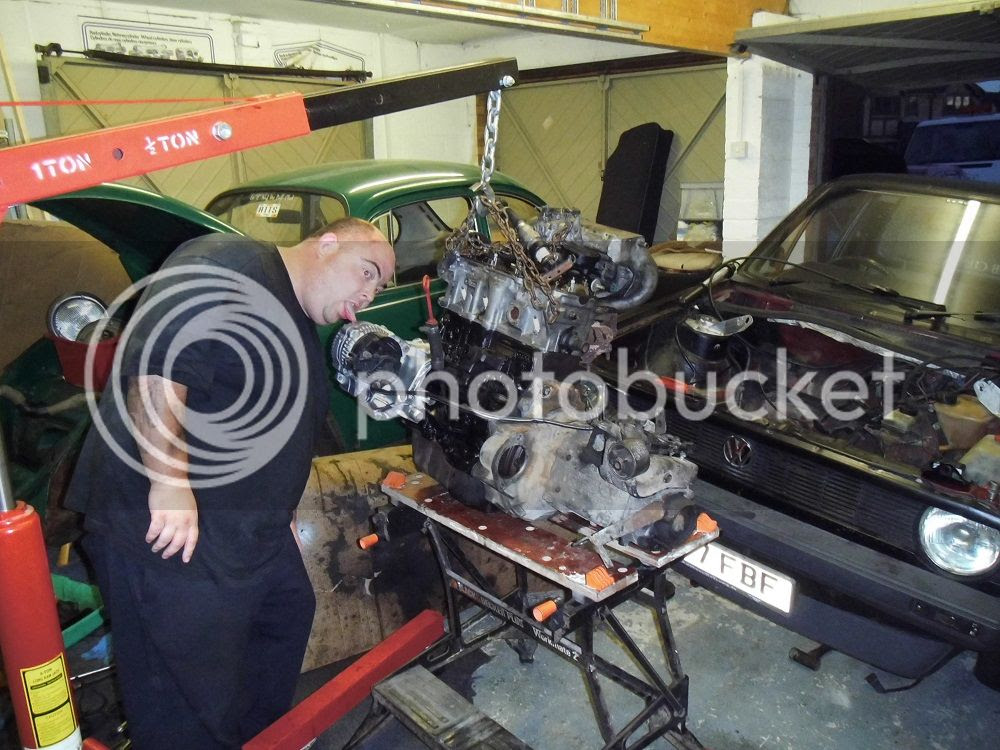 Engine and gearbox built up, new alternator fitted, and ready to go in.
A quick stop for late night pizza then push on... 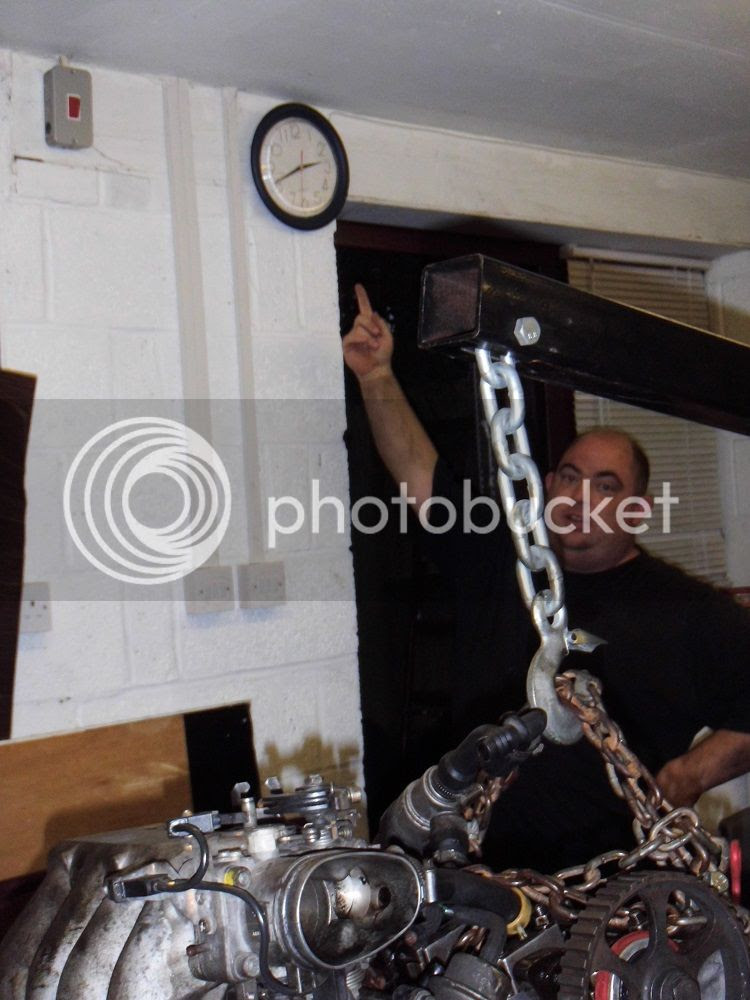 It's 2.41 in the evening and the engine/box is about to go in 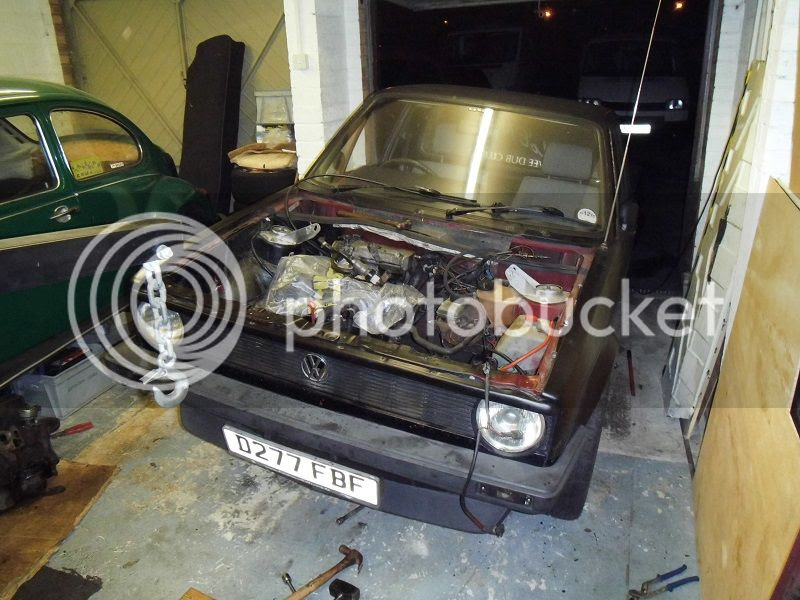 Engine and gearbox bolted in - time to call it a night

Saturday morning rolled around far too soon and after a couple of strong coffees we were back on it - nailing on all the loose stuff - radiator, belts, cables, gear linkage but no rocker cover yet, the lacquer's still drying. The new alternator conversion meant that it fouled the radiator so we moved the rad over but this now fouled the battery. Luckily we had H's spare battery sat in his Beetle mere inches away so in that went and it's a perfect fit. 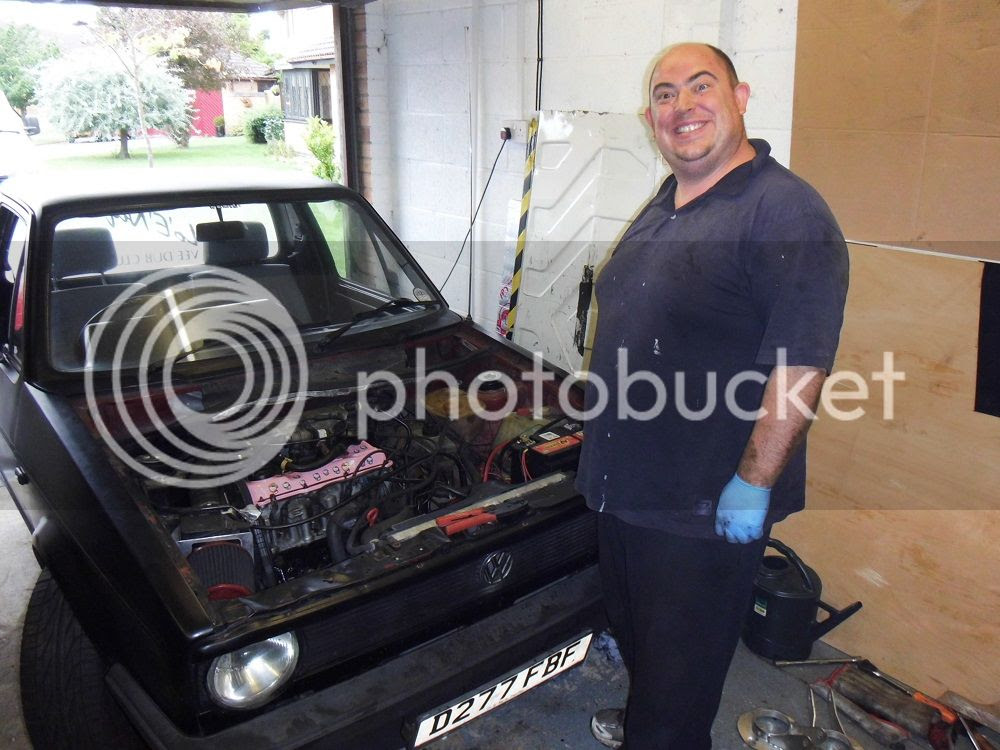 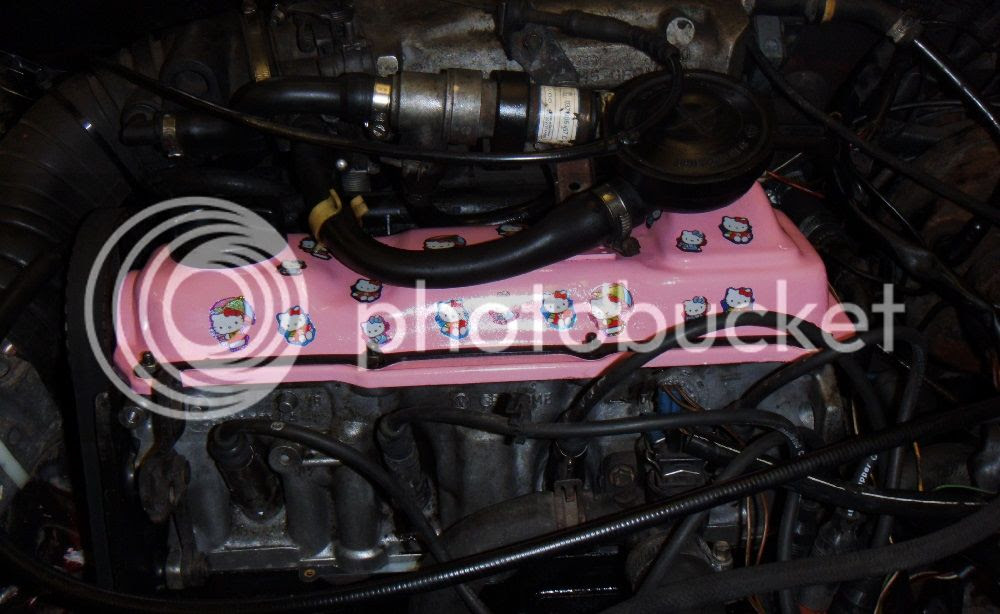 So, with everything checked it was time to fire it up - fingers crossed. Success! OK, the timing needed fine tuning but it's running and sounding good. Time for a test drive so Ross jumped in, eventually found reverse and stalled it. Damn.

There the nightmare started - it wouldn't start, if it did it ran badly and, even worse, H's new starter motor seemed to be packing up. We spent hours, from 2.41 to 2.41, checking and re-checking everything. All the electrics were checked, the belt timing checked, double checked and triple checked. Nothing seemed wrong. It was late, we were getting angry/frustrated so we called it a night.

Sunday morning was definitely too early but hopefully a night's sleep wil have helped. Ross checked the belt timing, again, and then had a moment of inspiration and checked the engine earth with a jump lead. The starter motor suddenly is working perfectly again. So, despite being tight before, despite the engine running perfectly earlier we had a loose earth. Tightened up the engine now turned over fine but it would not start, but there was the occasional cough and splutter. After much head scratching Ross decided the duff earth had affected the ECU. To test this theory we needed a spare - quick, call Josh! So Ross sped off down to Thame and back, plugged it in and VROOM! At last! A few quick road tests and we're happy. Just as well, we were knackered. 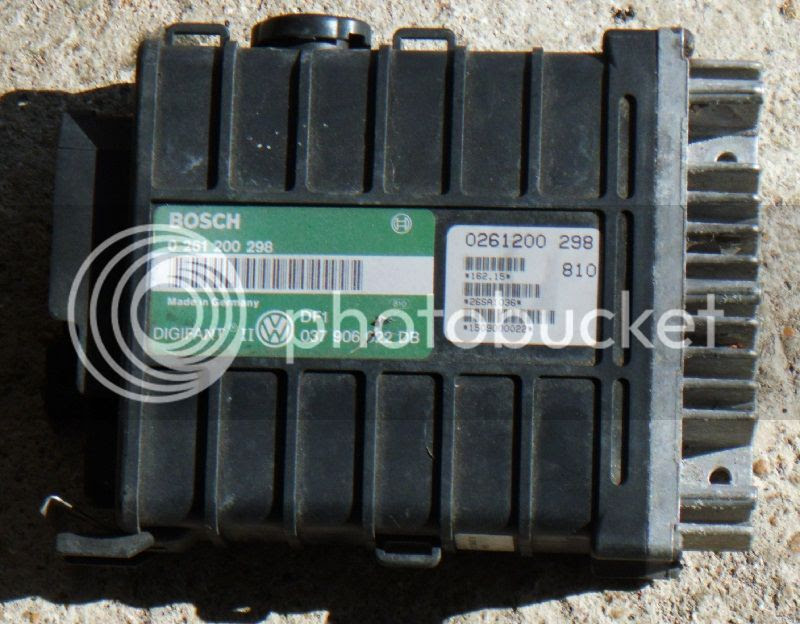 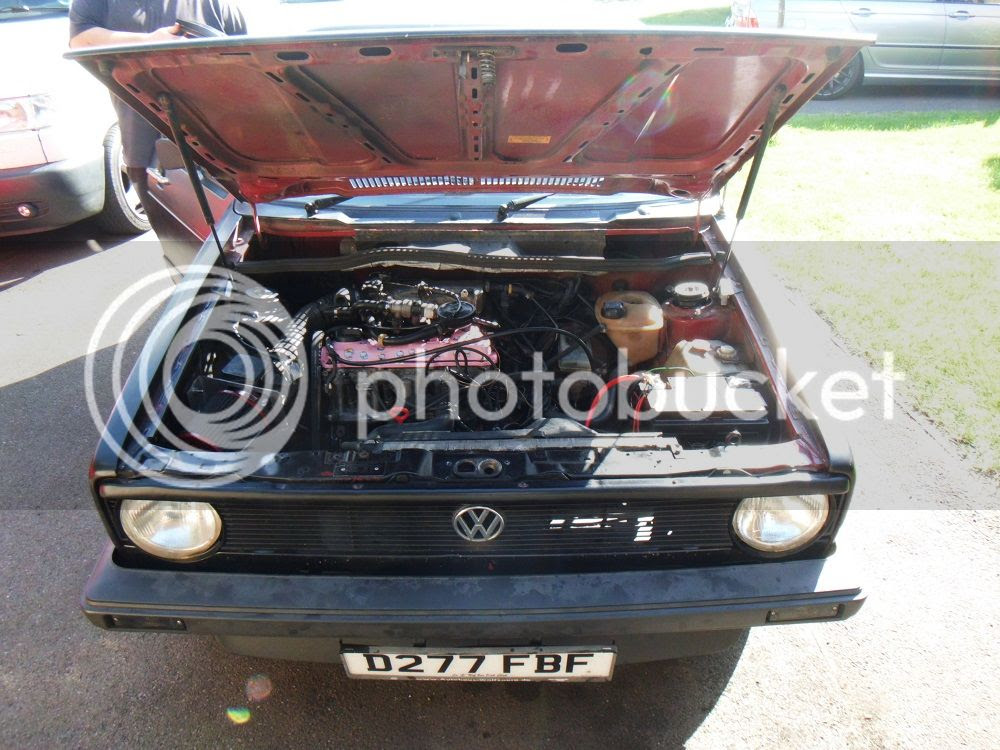 The last task was to park it back on Ross's driveway in time for H's return. Once he was back he was faced with 2 grinning idiots handing him his keys and, after much persuasion, he fired it up. Success, and a smile which was bigger after a test drive - that made it all worth while.

There is still a tappy tappet, which is a mystery as they are all new, but that can be solved with the engine in situ. The main thing is the Caddy lives.

This silliness was brought to you by the letters A, L, D and I and the number 2.41 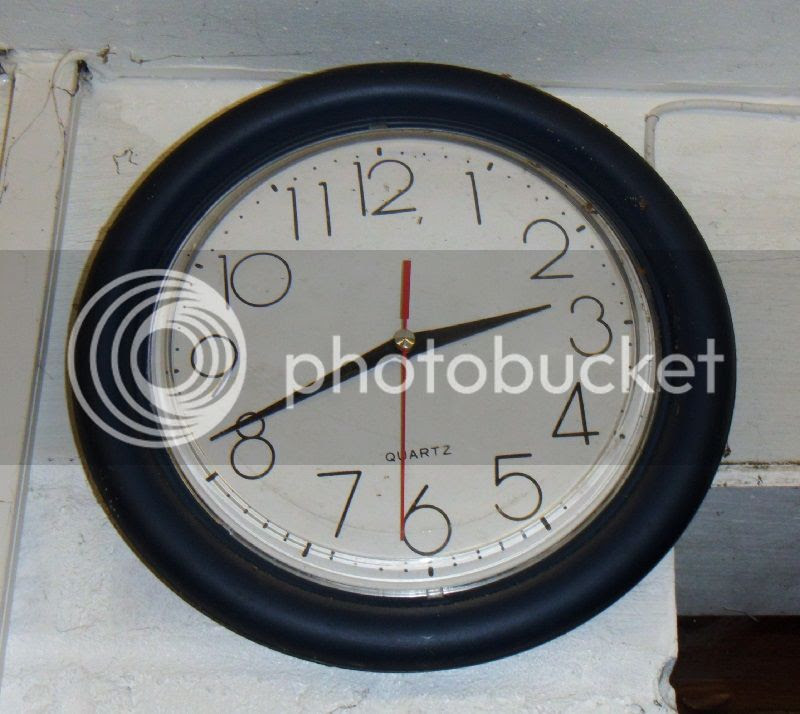 It's correct twice a day


Ross has plenty more pics including many of me looking like an idiot
ginga
Posted by Lo 'E' Nuf at 13:00 No comments:

Santa Pod have uploaded a half hour Bug Jam review onto YouTube...


Plus, here's a few pics of the weekend. (click pics for full size) 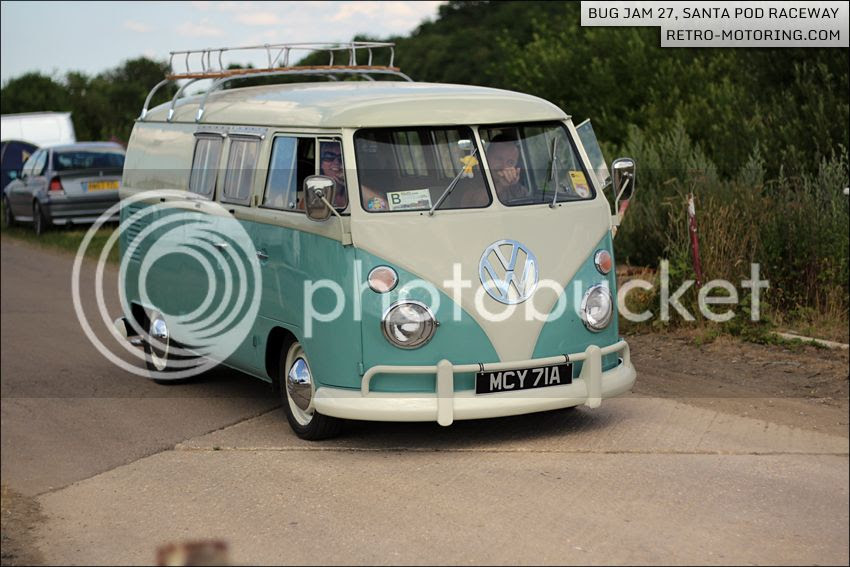 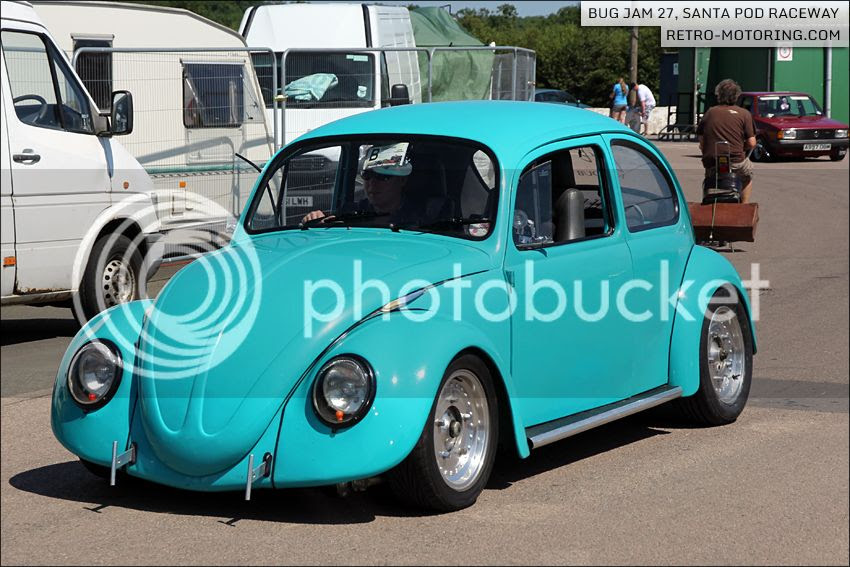 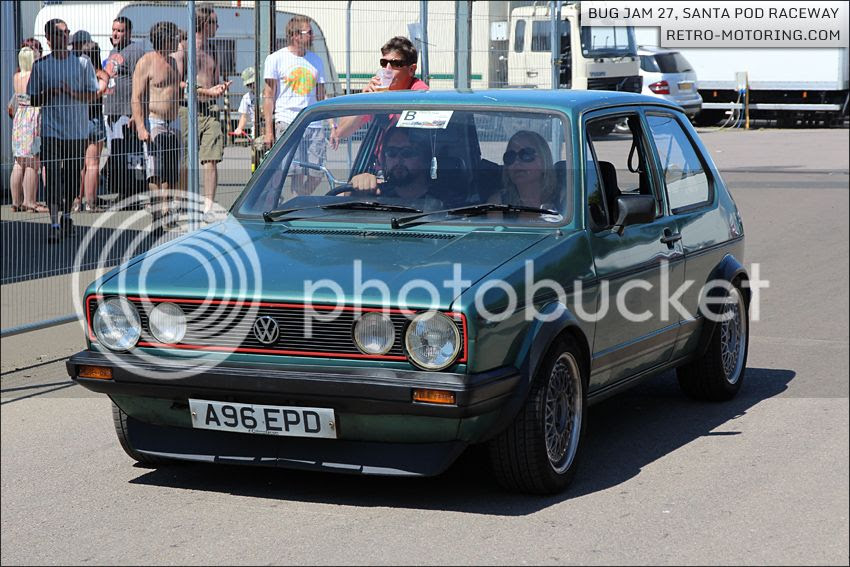 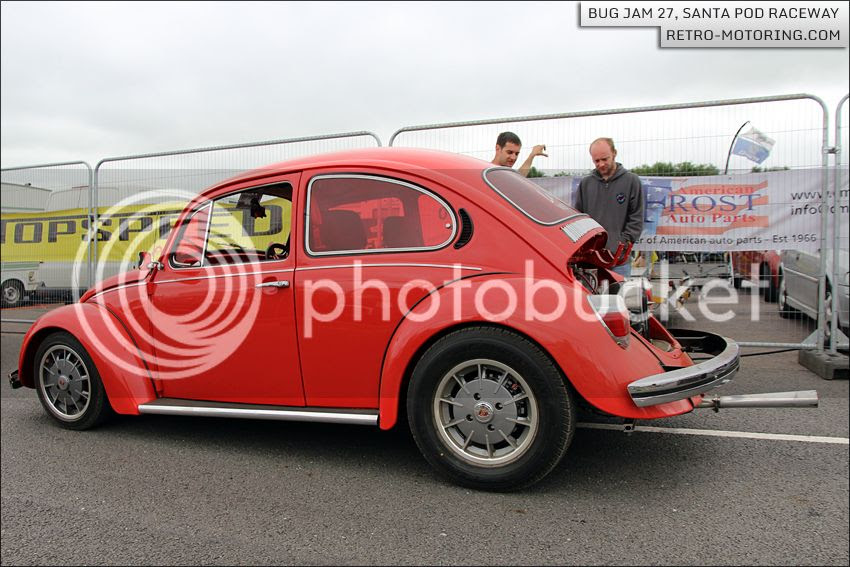 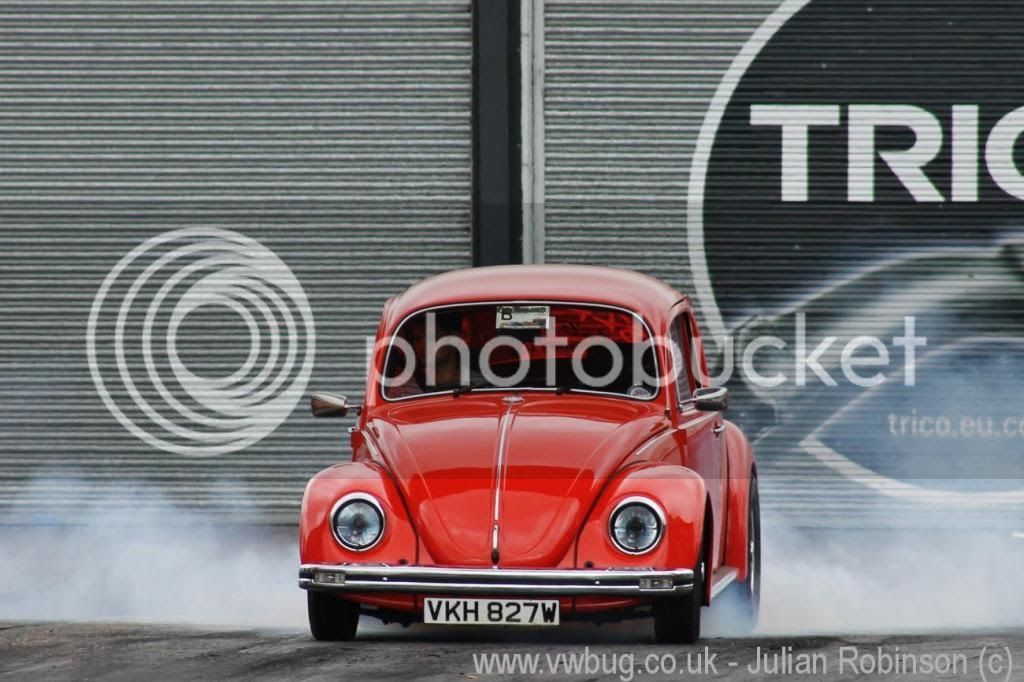 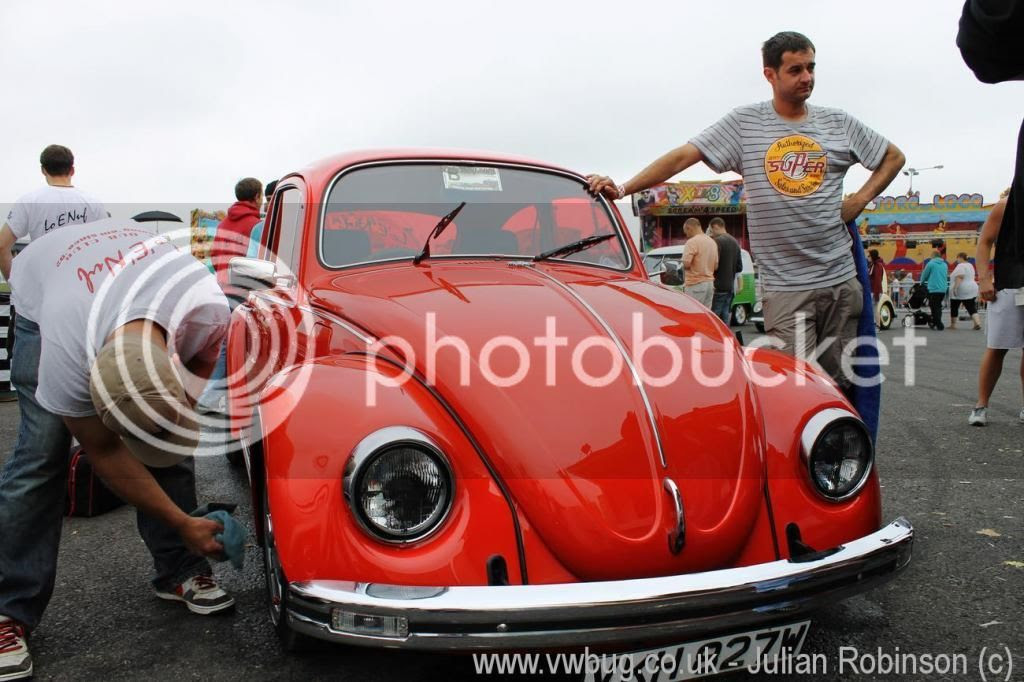 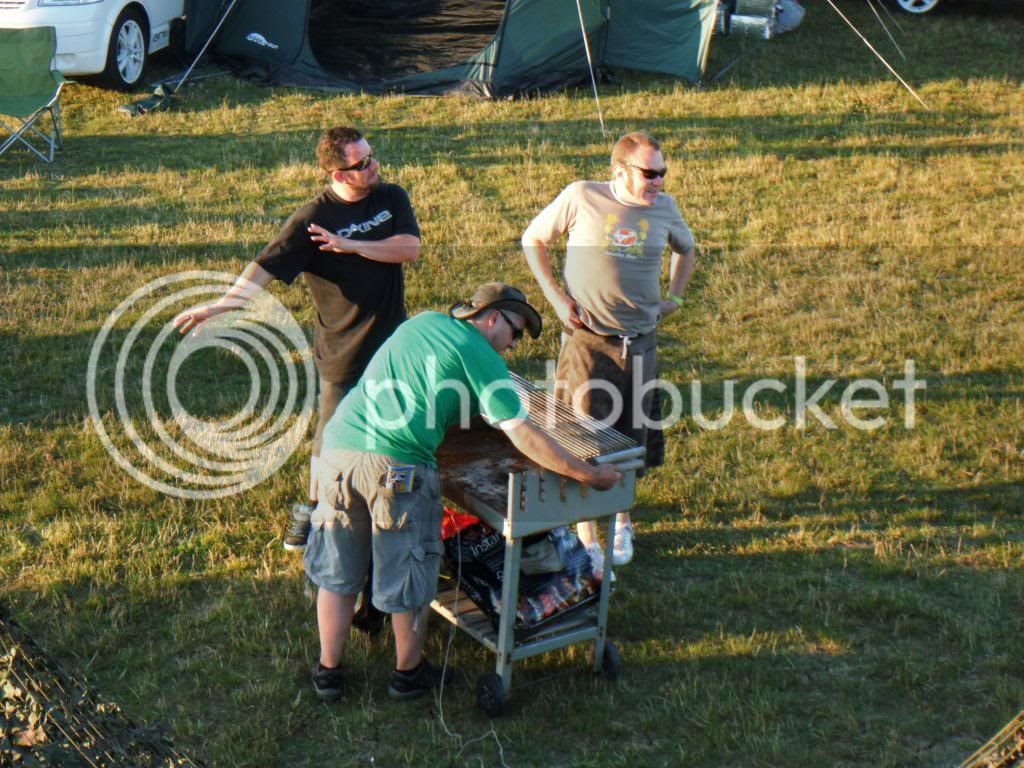 Should they be left in charge of fire? 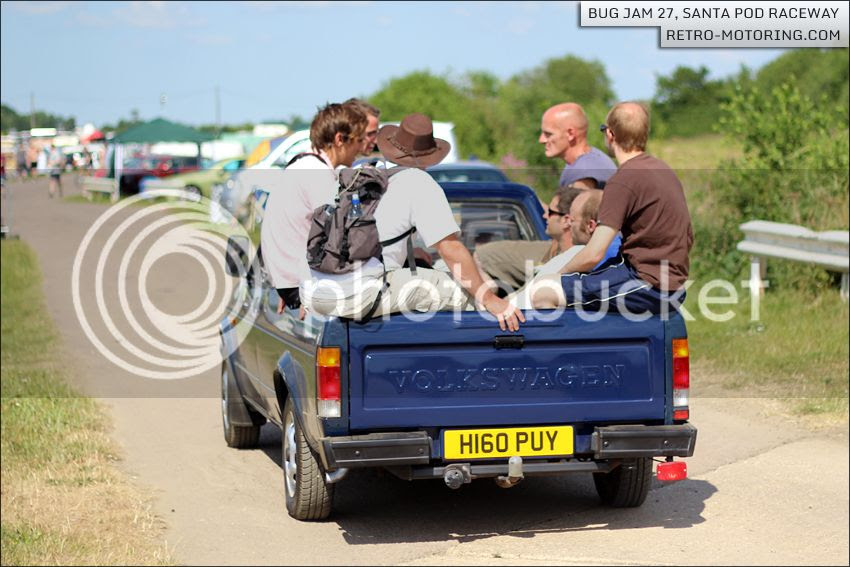 Out for a cruz 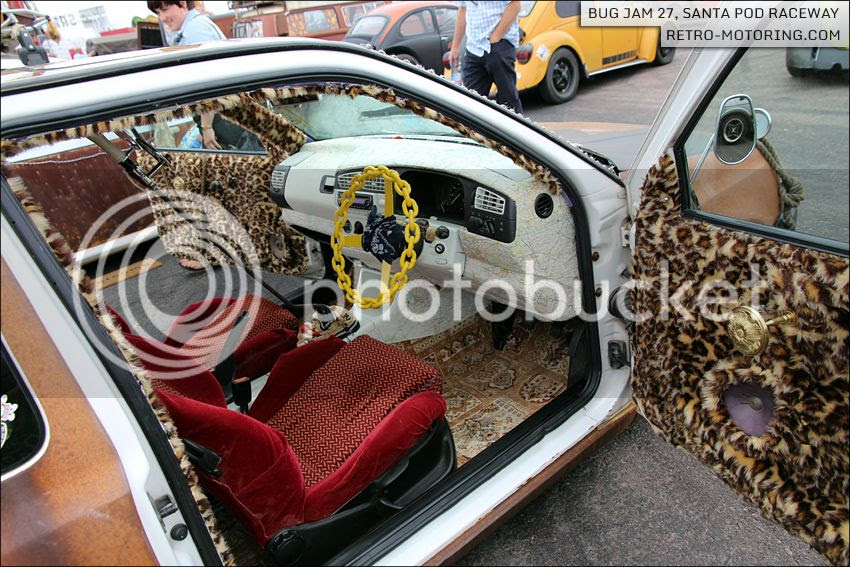 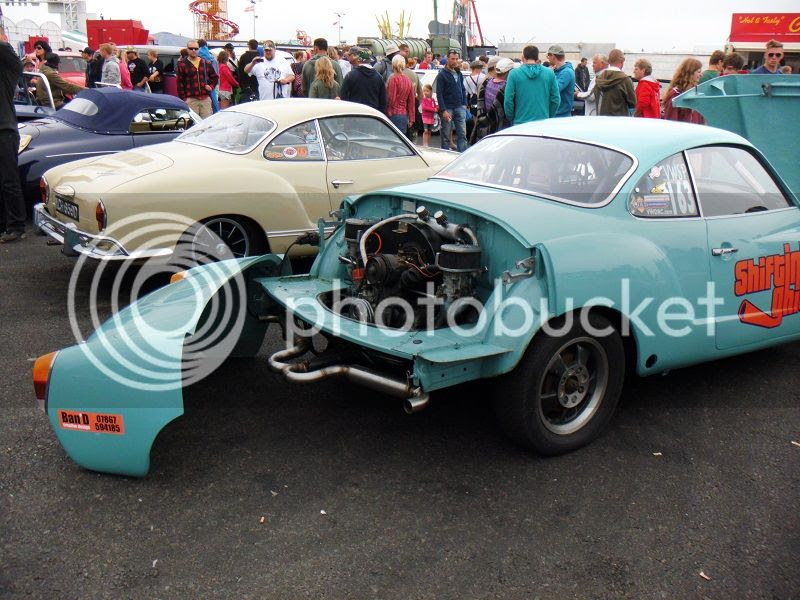